The seeds of the Buğday (meaning “wheat”) Movement were first sown in 1990 at a small market stall where founder Victor Ananias sold brown rice, olive oil, sage, thyme, and sea salt in the Bodrum outdoor market. Ananias then moved his operation to the Başak Natural Products Shop, which he opened on the Eski Hükümet Street in Bodrum the following year. After adding Başak Naturcafe to the shop in 1992, it became a frequent destination for those seeking to eat healthily as well as a meeting place for environmentalists.

In March 1992, Ananias restored an old Greek house and opened Buğday Vegetarian Restaurant. The restaurant prepared and presented unprocessed local, seasonal, natural foods without compromising its principles in its cuisine. At the same time, it hosted meetings, seminars, courses and exhibitions on individual development, environment and ecological life, and offered a small library containing domestic and foreign publications on these subjects.

Patrons from around Turkey and across the globe came to the restaurant because of their interest in healthy eating and ecological life. Eventually, the restaurant’s kitchen became a meeting point where many volunteers came together to learn about nature-friendly cooking. While more and more people sought information on environmentally conscious cuisine and lifestyle, over time the need to publish a bulletin arose.

In 1998, the first Buğday Bulletin was published and included news from the Buğday Vegetarian Restaurant and Başak Natural Products Shop, information about ecological architecture, healthy recipes, and articles about natural, ecological and traditional products. One year later, in 1999, the bulletin became a magazine and reached its subscribers across Turkey under the name of Buğday Ecological Living Magazine. In a short time, the magazine became a contact point and a resource for all areas of ecological life, from ecological agriculture and products to healthy nutrition, from individual development to natural healing methods, from consumption habits to architecture. It has become a resource.

By the end of the 1990s, Buğday became a movement that brought many people interested in ecology together, beyond being just a restaurant and a magazine. People from many different backgrounds attended the Congress for a Healthy Ecological Product Market held by Buğday Ecological Living Magazine in September 1999 on the shores of Lake Bafa: ecological product producers, sellers, and exporters; ecological agriculturists; academic experts healthy product entrepreneurs; and people interested in eating healthy foods and being a part of an ecological production and consumption cycle. After being accepted as a full member of the International Federation of Organic Agriculture Movements (IFOAM) in 2000, Buğday started to share its knowledge and experience through trainings.

Over the years, Buğday Association has received the support of its volunteers and members from many different parts of the world and Turkey since the day it was founded. We continue to provide access to healthy and safe food, information on nature-friendly production and consumption. We strive to create awareness and understanding of ecological life in individuals and in society as a whole by strengthening the ties between urban and rural areas through our national and international projects, our networks and collaborations, and our events.

Buğday Association provided consultancy to many food producers to adapt Ecological, Healthy, Fair and Sustainable (ESAS’lı) criteria for their farms. These farms later became the first members of the TaTuTa Ecological Farm Visit program. With the GARDEN program in Cumhuriyetköy village of Istanbul, one of the first Community Supported Agriculture programs in Turkey, Buğday Association developed a cooperative model that supports ecological production in cities while providing easy access to reliable and healthy food. The GARDEN project also created an educational space for farmers, consumers, local governments, educators, and children about ecological farming practices

Farmers in the ever-expanding network of the Buğday Association became the leading producers of the 100% Ecological Markets, the first of which was established in Istanbul Şişli in 2006. Ecological producers, whose numbers have increased all over Turkey, have taken part in many model projects of Buğday from the Seed Exchange Network project to No Pesticides on my Plate. 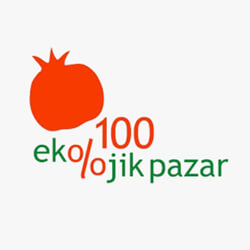 There are now five 100% Ecological Markets throughout Turkey, creating a multi-stakeholder dialogue environment that serves the greater good in the field of green economy and serving as a model for other ecological markets. 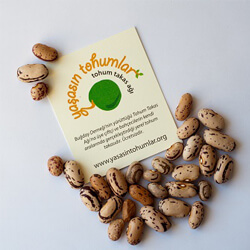 Buğday Association created and ran the Seed Exchange Network Project from 2011-2014 to create a participatory and transparent model for disseminating and sharing local seeds. From 2013 to 2014, Buğday Association also carried out the Direct and Reliable Access to Natural and Local Produce project with the help of the UNDP GEF/SGP. Through these two projects, Buğday Association created a model for local food chains in Turkey where small eco-friendly producers and health-conscious consumers come together without intermediaries on the basis of trust.

Buğday Association also organized both the 18th IFOAM World Organic Congress, where the leading names of real food and organic agriculture came together in Istanbul in 2014, and organized the 4th International WWOOF Conference in Fethiye in the same year.

Between 2015 and 2016, we partnered with 9 state universities in Mersin, Adana, İstanbul, İzmir, Balıkesir, Çanakkale and Aydın to establish campus gardens through the Nature Friendly Urban Gardens project. Through this, Buğday Association trained university students in seed saving, compost production, and ecological life. 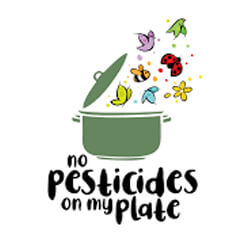 Buğday Association carried out the No Pesticides on my Plate project from 2019 to 2020 with the support of the European Union’s Civil Society Dialogue V Program, in partnership with European Pesticide Action Network (PAN Europe), which spread information about the harms of pesticide use in Turkey and its eco-friendly alternatives among producers, consumers, and key decision makers.

Between May 2019 and August 2021, Buğday Association implemented the Agroecological Transformation with Food Communities project in the Güdül district of Ankara in partnership with Dört Mevsim Ecological Living Association with the support of the UNDP GEF/SGP. Through this project, Buğday supported a transition to environmentally friendly agroecological food systems through trainings and mentoring with key stakeholders. 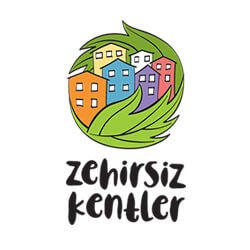 The Mediterranean Caravan: Learning and Sharing Agroecology (MedCaravan) project, supported by the European Union under the Erasmus+ Programme, aims to collect local and rural agroecology knowledge and practices, and share the compiled knowledge and experiences with a wider audience though educational materials and an online platform.

Buğday Association started implementing the Agroecological Youth Education for Future (EU Erasmus+) project in June 2021. The project will be carried out until 31 November 2023, under the leadership of AMPI from the Czech Republic and partners from Italy, France, Serbia and Greece, and will convey the knowledge of agroecology as a holistic science for sustainable environment and food production to young people aged 13-18, thereby increasing their environmental awareness and ecological literacy. 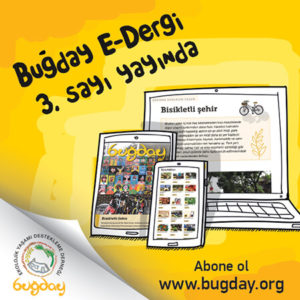 Bugday Association began publishing the Buğday E-Magazine in March 2021, publishing news, articles, interviews and announcements on many topics from food to climate change, from rural life to ecological life in the city, from nature-friendly cuisine to non-toxic cleaning, and from harvest stories to developments in ecological technology.